You are here: Home1 / Why we normal people should choose CPE or TPE gloves

More and more people use disposable gloves in 2020 than ever before, especially now, the strongest B.1.1.7 COVID-19. We need to protect ourselves and also protect others.

What is CPE glove and TPE glove

I have discussed it before in article “Differences among PE CPE TPE Gloves ”, you can learn it there, and if you want to know more things, you can email me and discuss, welcome anyone discuss with me.

These PE film gloves also can protect you

No matter PE, CPE, TPE gloves, they are all belong to PE material, made with PE film, it is a very good film that can isolate air and liquid than other film. So they can protect you as well as Nitrile and PVC gloves. But the first thing is to confirm there are no pink hole on them and the gloves are good appearance in water test. That’s why i suggest you to choose high weight CPE gloves and TPE gloves instead of HDPE and LDPE gloves. One piece 1.6 gram to 2.5 gram is your best choice, enough thickness and enough protect. 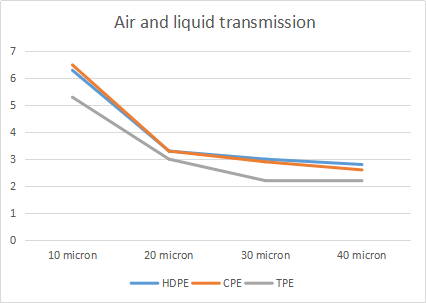 The energy to produce one piece of PVC or Nitrile glove and produce more than 10 pieces of TPE or CPE gloves, and produce more than 100 pieces of PE gloves. And during the production, the PE film gloves making lines will not influence the environment much, and not use plasticizer as well. After use, all types disposable gloves can’t be bio degradable, will be burn, during burn, of course less weight will use less energy too. That’s how we can help the earth, we have to use the disposable gloves to protect ourselves, but we also should protect earth too, or we will destroy this unique star.

CPE and TPE gloves are very strong sealed and also can be done to fit AQL 1.5 quality lever, can be used nearly half a day or even a whole day, though PE gloves are cheaper than them, but PE gloves are so thin and so easy to broken, if we calculate the cost per hour, PE gloves will be never “cheap”, it is real disposable. 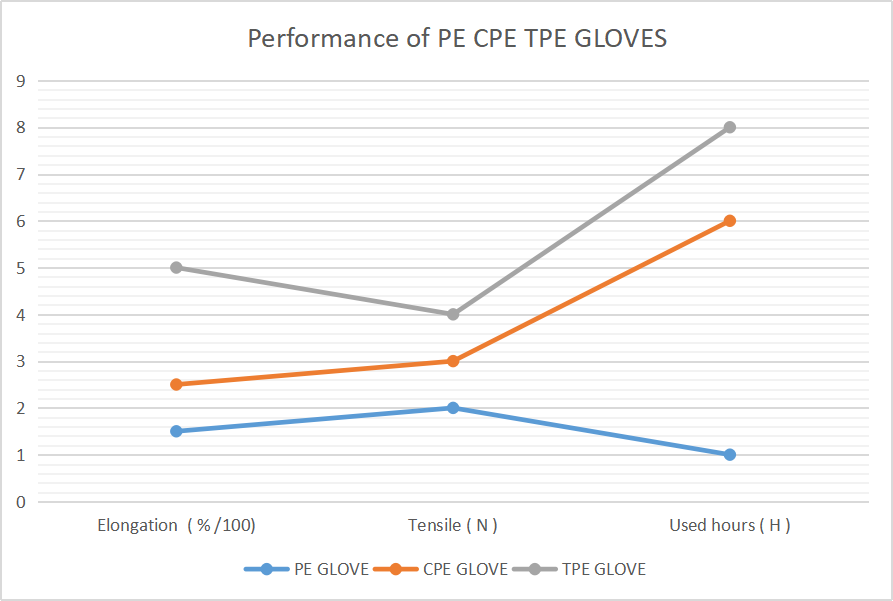 As you see in the table, PE gloves are sealed different from  CPE and TPE gloves, so the sealed temperature is much lower than them, this is one reason why it can’t be used so long time. Another reason is the material and thickness, it is much thinner and use cheaper material.

Average people like me use gloves to eat food, wash things, touch people or things, such as these simple works only need to use CPE gloves or TPE gloves. They are enough safe to protect people or others. Doctors or nurses who will touch patients need better gloves such as Nitrile gloves or PVC gloves, because they need to wear it long time and do much harder and more dangerous works. We should leave these better gloves for them, that’s also one way to protect ourselves. If they fall down firstly, then we will fall down of course. Hope every average people like me do not to use the PVC or Nitrile gloves in the future in not requisite situation.

You must choose gloves, TPE and CPE gloves are your best choice

You must use disposable gloves in the future, i have to say that. And not only you, but also you should suggest your loves. More bacteria has come to earth, because the permafrost melt. More extreme weather happens, it is really bad for human being, it has influence the survive of all people. We need to protect ourselves and our mother land, the earth too.